“Sibling relationships are emotionally powerful and critically important not only in childhood but over the course of a lifetime. Siblings form a child’s first peer group, and children learn social skills, particularly in managing conflict, from negotiating with brothers and sisters. Sibling relationships can provide a significant source of continuity throughout a child’s lifetime and are likely to be the longest relationships that most people experience.” Approximately 70 percent of children in foster care in the United States have another sibling also in care (Shlonsky, Elkins, Bellamy, & Ashare, 2005).

Darius and Harvey are brothers who were removed from their mother’s care after she was arrested for illegal drug use.  The boys were eight and nine years old.  While in care, the boys were separated and sent to different placements.  Darius and Harvey were lucky enough to be placed in the home of relatives, Harvey with his father and Darius with an aunt.  However, family friction between the father and aunt strained regular communication between the brothers.  CLC was appointed to represent Darius to advocate for him and his impending adoption by the aunt.  Harvey’s mother had legally transferred custody of him to his father.

In consulting with his volunteer attorney, Darius expressed his worries about keeping in touch with Harvey after being adopted by his aunt.  Darius explained that he saw Harvey on a regular basis most of the time, but that the aunt and the father were often at odds.  The boys felt uncomfortable about asking to see each other.  They never knew how long it would take for the adults to reconcile.  Also, Harvey overheard his father talk about moving to another state, and passed the information along to Darius.   The boys worried about the future of their relationship and couldn’t imagine a world where they would not be in regular contact.

Eventually, Darius’s attorney’s persistence in advocating for a sibling contact agreement was successful.  They tailored the agreement to address the possibility that Harvey may move to another state in the future.  The agreement was signed ensuring Harvey and Darius will continue to provide support for each other even when they are separated. 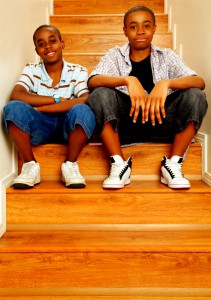