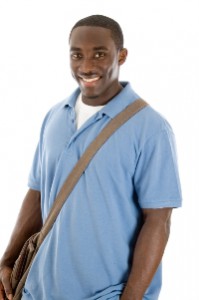 As a child, Steve lived with his Mom and her boyfriend who was a pimp and drug dealer. Mom’s boyfriend routinely beat the heck out of Steve and his mother. Steve was forced to watch as the boyfriend murdered a rival drug dealer. Even then, Steve lived with his mother till she died of an illness when he was 11. Child Protection placed Steve in the care of his father who had remarried. The stepmother hated him and abused him. Eventually, his father kicked him out of the house and he ended up on the streets. Child Protection got him back and put him into foster care. While in foster care, he bounced from foster home to foster home and school to school. One foster family routinely isolated him from everyone else in the house because he was “bad”. Steve began to act out at school, was put in detention almost daily, and then was placed in a special ed program.

CLC was appointed by the court to represent Steve when he was 14.  When the attorney took the case, Child Protection was about to place Steve in a residential treatment program for kids with mental health problems. The CLC attorney fought to keep him out of the facility and to get the mental health assessments he had never had (which determined that a facility was not warranted). The attorney also fought to get him a stable placement where he was welcomed and felt comfortable. The attorney also advocated for an education assessment that resulted in Steve being removed from the special ed. program and the “bad kids” program, and got him into the mainstream high school program. As a result, Steve graduated from high school. Recently, as Steve neared age 18, the attorney fought the county’s efforts to discharge him out of foster care on his 18th birthday. The attorney successfully forced the county to provide Steve with transitional living education, and funding for transitional living costs and job training. Steve currently has a fulltime job and is living in his own apartment.

Without a lawyer to represent him, Steve:

Instead, Steve, like many of CLC’s clients, has a future as a productive member of our society.